A few days ago I was on a panel at the UBS flagship European conference in London looking at the global consequences of China’s slowdown. You can see a 5 minute video on the same topic I did with the FT’s Dan McCrum here. I don’t think China is going to trigger a global recession unless things go badly out of control and growth evaporates totally. Absent that, the main take away is the duration and the pattern of China’s slowing economy and its transition. The latter term implies a known outcome, which unfortunately isn’t the case. The adjustment is likely to be spread over a few years, and the pattern, ie whether the authorities succeed with rebalancing and importantly with extensive economic reform, is very much open to question, at best. What follows is the gist of my remarks, enhanced a bit in written form.

1. China is pursuing an incoherent policy agenda. It has a growth target of 7%, which the 13th Five Year Plan will lower to 6.53% per annum, a number that drops out of the plan to double per capita income by 2020. But even this exceeds the economy’s potential growth rate nowadays. Pursuing growth targets is an integral part of what the Chinese political economy model is all about, but it leads to ‘bad’ behaviour.

That is to say, it encourages behaviour which conflicts with a second broad goal, which is to rebalance, or what we would call restructure, its economy away from a reliance on credit and investment. The investment rate is falling slowly, as shown in Chart 1 below, meaning that the weight of consumption and service industries is rising, de facto, but in the context of a steady decline in economic growth. Credit still looks plentiful, as it expands at twice the rate of money GDP, but the private sector is unquestionably facing a credit squeezer. Where is the credit then going? Efforts to shore up growth tend to rely on traditional policy measures that slow or thwart rebalancing. 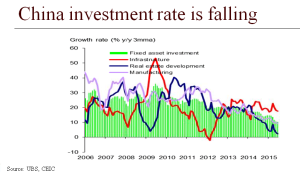 At the same time, the government is attempting to pursue a programme of broad economic reforms. The most advanced are financial liberalisation, capital account opening, and local government financing, but even these are partially successful, of limited scope, or in the case of the first two, facing pushback and resistance in the wake of the stock and exchange market shenanigans earlier this year. Other important areas of reform, including those involving SOEs, land ownership and rights, hukou, the balance between state and private sectors, and entry barriers to service industries are only making incremental or peripheral progress, or have stalled as the government priorities ‘stability’ and ‘growth’. Many parts of the reform agenda are also not compatible with sustained high economic growth and rebalancing, as currently pursued.

2. As shown above, China’s investment rate in real estate, construction, and manufacturing is clearly dropping. Only infrastructure investment, which a fifth of total fixed asset investment, is holding up as periodic stimulus programmes are enacted. Other Asian economies that had 15-20 year periods of high investment – Japan, Korea, and Taiwan – had investment rates that weren’t as high as China’s current 46% but these eventually fell back to about 25-30% of GDP. China may be different to the extent that its economy is a lot bigger and less export-driven, but there is every reason to expect it to conform to this pattern, even if the investment rate settles at a slightly higher level. China is already conforming to the patterns that these other countries displayed, ie the capital and total factor productivity contributions to growth began to decay about 10-15 years into the high investment period. In China’s case, these started to roll over in 2001, and so the turning point has arrived pretty much on time.

3. What Japan, Korea and Taiwan managed to do as their capital contributions began to slow down was to sustain or raise total factor productivity growth, and this is precisely what China has to do too. Were it as easy simply as to say so. But as we know, this comes down eventually to building robust and trusted institutions, and extensive economic reforms. It isn’t at all clear that China is willing and able to cross this particular Rubicon. A knowledge-information-innovation economy requires access to information and openness, neither of which are on offer. The introduction of market mechanisms in resource and capital allocation requires a deep-rooted belief in markets, along with an independent regulatory and legal institutional environment. A vibrant private sector requires the state to promote and nurture it, rather than to play the role of dominant owner, and regulator.

Think only of the contentious issue of SOE reform: even if mixed ownership, ie letting private capital in, were a genuinely held belief, it would only make sense in the context of enabling legislation that opened up the boards of directors to private capital providers and that provided for a governance structure that abandoned all residual connections between the old and new corporate forms. In other words, reform isn’t just about top line slogans, but very much about the messy and politically complicated things that have to be done to make it work.

4. China’s awkward economic transition, then, is a medium- to long-term work-out, not just a 2015-16 fix. Accordingly, the rest of the world is going to have to prepare for a different sort of China in the future. Already we can identify 3 ways in which China is shaping, and shaking the world.

First, commodities. The so-called commodities super-cycle really got going in the mid-2000s, as China’s GDP growth accelerated into double-digits, and then especially as the real estate and construction boom got into full swing. It resumed after a brief slump as the financial crisis erupted, peaking in about 2014 as China’s economy started to turn more significantly. The bottom line is that the commodity-intensity of China’s economy has diminished and doesn’t look likely to revive.

Eventually as capex in commodity countries and companies is squeezed hard enough prices should recover, but the China factor in the commodities story does now look like a spent force. Metal and mineral price falls have had especially marked effects on the exports, investment and incomes of commodity-centric emerging and developing countries, as opposed to, say manufacturing ones. That said, it is fair to say that a slower China is affecting the latter too, as ‘neighbourhood effects’ are transmitted through supply chains, and especially those that are closest to China, geographically. China isn’t the only factor contributing to the growth hiatus in emerging markets but it is an important one.

Second, trade. As the chart below shows, exports to China as a share of GDP are very high in the case of Hong Kong, but also Sub-Sahara Africa, Middle East and other Asian economies too. 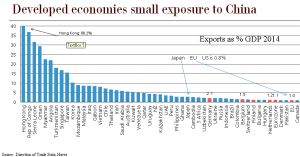 Notably, though, Japan, the EU and the US are not overly exposed, as measured by exports to China relative to their GDP. To be sure, companies that rely on selling, say, luxury goods, cars, mining equipment and complex capital goods to China are going to continue to feel the pinch, but this does not represent a systemic threat or a risk of global recession. Pushed, you could argue that if Chinese growth evaporated altogether, and the economy were to spend 2-3 years without (much) growth, the consequences would be far greater. But as things stand, and as they look, it’s more discomfort than doom.

Note also that China’s current account surplus is likely to double this year from about $220 billion in 2014 or 2% GDP to nearly $450 billion in 2015 or about 4% of GDP. This is technically a plus for China’s GDP, and a negative for the rest of the world, but its distribution is likely to be concentrated among emerging and developing, rather than developed economies, certainly relative to economic size.

Third, finance. One way or another, even if it takes some time, deleveraging is coming to China. It has already been noted that the regulatory agencies have been urging banks to boost their provisions for bad debt, no one believes the non-performing loan ratio is low as 1%, the IMF thinks it maybe as high as 5-6%, and battle-hardened analysts over many years would be surprised if China’s NPL rate turned out eventually to be less than 20%. There are of course many reasons why recognition isn’t happening, and many institutional impediments to that process. Ever-greening, or rolling of loans, and the diversion of credit to hard-pressed borrowers so that they can remain current on their obligations is most likely common.

This chart, though, from the BIS, sheds a different kind of light on global transmission mechanisms, which are noteworthy. It shows the build up in global bank claims on Asia-Pacific borrowers, and specifically both the doubling of claims since 2007-08, and the distribution of ownership by banks. 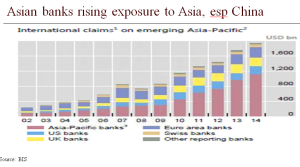 Working through the numbers, before the financial crisis, EU, Asian and US/UK/Swiss banks each held about a third of claims. By this year, the EU share had fallen to 14%, while that of Asian banks had risen to 57%, while that of US/UK/Swiss banks was more or less the same. Since the BIS, which is the source of the graph, also noted that claims on China had gone up sixfold since 2008, it stands to reason that predominantly HK and Singapore-based (including Chinese) banks provided the predominantly China-based expansion in lending over the last few years. As China deleverages, and depending on the patterns of NPLs and defaults as they emerge, we should expect these transmission mechanisms to become more emphatic.

Paris attacks: what would happen if Schengen crumbled?

@TheKopHQ Poor start with 2 pts from 6. And not v top sides. What gives? Not just injuries,
5 hours ago
Extrapolation…. Y’know what they say… makes you go blind. This consensus narrative has a shakiness that’s positivel… twitter.com/i/web/status/1…
13 hours ago
Author who brought dystopian future and culture into her writing, reminds us how we are flirting with it: If we do… twitter.com/i/web/status/1…
19 hours ago
@BillBailey: To say Nadine Dorries hasn’t got a grip on things is an insult to grip and things
2 days ago
@PhillipsPOBrien Or vassal
3 days ago