For the sake of clarity, repeat three things after me:

People who have become China experts in the last few weeks, point to the sharp falls in power consumption and freight traffic – two of the three indicators in the now famed Li Keqiang index – but these and other industrial indicators don’t tell us anything about what’s going on in the services or tertiary sector, which accounts for about half of the economy. Even if producers are having a tough time at the moment, consumers of household goods and services and buyers of real estate haven’t gone to ground. Retail sales were still up by over 10% in July, and property sales registered pretty robust year on year increases of over 13% in the second quarter and 19% in July. The government is going to continue to support the economy with infrastructure spending, monetary easing, and fiscal and debt initiatives.

In August, even though the Caixin and NBS PMI data were down, some of the high frequency data could ‘look’ better in year-on-year terms, largely because of flattering base effects following from declines this time last year. The official data are likely to continue to show the economy growing around 6.5-6.8% in annual terms in the next few quarters.

2. What’s going on China is serious

The economy is the fourth year of a structural slowdown that shows no signs of ending and is becoming increasingly insensitive to the government’s stimulus measures. This chart of the manufacturing, services and total PMI indices in August captures the situation well, and points specifically to the fact that the services component, which still shows expansion, isn’t doing enough to offset the decline in manufacturing. 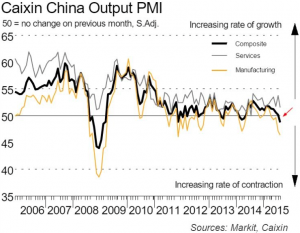 As the second half of 2015 unfolds, we should expect the services sector to weaken, largely as the drag from the financial sector (following the stock market plunge) permeates the economy. This could take around 0.5% off GDP growth. The contraction in heavy industry, including metals, chemicals, cement, and power generation, may already have tipped some provinces in the north-east and west of China into a ‘recession’, defined as growth below 4-5%. Manufacturing investment will remain weak not least as a consequence of persistent excess capacity, deflation and debt in the industrial part of the economy.

In spite of the summer recovery in property sales and prices, mostly in Tier 1 cities, and the implied erosion of the overhang of housing inventory, there is next to no prospect that the trend fall in real estate and construction investment will stop. Infrastructure spending and other policy easing stimuli in the first seven months of 2015 may have amounted to about 1.3% of GDP, and so even if we think the official growth data of about 7% are right – which is increasingly questionable – the underlying pace of economic expansion is a ‘high 5’ percent, not 7%.

This graph, showing the decomposition of fixed asset investment, shows that even though infrastructure investment, which is about a fifth, is holding up, it’s not enough to hold up the entire component. And this, after all, is the kernel of rebalancing: a fall in the investment rate that allows the consumption share of GDP to rise – but in the context, of course, of a slower overall growth rate. 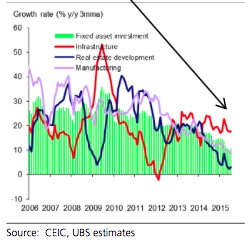 We don’t know what’s really going on in the Chinese labour market, but the employment component of the PMI has been falling for several months and registered 48 in August, indicating a decline in employment levels. The International Jobs Report, published in January by the IMF in conjunction with the Economist Intelligence Unit estimated that China’s unemployment rate was nearer 6% than the 4% at which official data have been stuck for over a decade. The data are an apparition anyway, because a large proportion of the urban population are migrants who do not have hukou, or urban registration entitling them to social benefits, and the registration for unemployment benfit is in any case thought to be low because the level of benefits is. Given what has happened to investment and construction this year, one could imagine that the unemployment rate has climbed since the end of 2014. This is way more important than GDP from a policy and political perspective, and the more policy is eased, the greater the concern will be about labour market conditions.

What has really set the cat amongst the pigeons this summer is the juxtaposition of a weakening economy, and the cack-handed manner in which the authorities managed the mini-devaluation of the yuan and the frantic attempt and failure to prop up the stock market. I’ve written about this most recently in the Financial Times here, and in the Times here.

The bottom line is that it is only possible to understand these economic, exchange rate and equity market developments in the context of the campaign waged by President, Xi Jinping to bolster the Communist Party’s authority and control. Specifically, the anti-corruption campaign, and the effective displacement of government ministries by so-called ‘small leading groups’, which are Party agencies, which are anything but small.

The benign view is that to strengthen the Party, increase compliance among cadres in the Party and in SOEs and local governments, and get reforms going to correct the imbalances in the economy, Xi had to amass power and centralise it. There is little question that he and his senior colleagues understand they have to implement deep and meaningful economic reforms to unlock new sources of economic growth and productivity.

The risk, as they know even better, is a loss of control. And they fear this more than anything. President Xi’s anti-corruption campaign is weeding out high profile Party misfits, but simultaneously stifling growth and initiative. It is also making an example of so called ‘tigers’ – top Party officials – but it is impossible to go after all the ‘flies’ – lower level officials, whose misdemeanours (or worse) have a real effect on peoples’ lives. Think only of the recent appalling chemicals explosion in Tianjn, where 11 local government and port officials have been accused of negligence and a beach of regulations, so far.

Xi has also substituted Party small leading groups for government institutions in broad areas of decision-making, undermining the authority of those charged with implementing reforms, and solidifying opposition among vested interests in the Party, SOEs and local governments. During the recent annual leaders’ get-away in the resort of Beidahe, State media reported that the government was facing resistance to reforms on an unimaginable scale. This expression of frustration was indicative not so much of the determination to press ahead regardless with market-oriented reforms and the creation of inclusive institutions, but of factional struggles and the influence in particular of retired leaders and senior Party officials. To all intents and purposes, meaningful reforms of SOEs, and local government finance functions and structures, and a retreat of the State from the commanding heights to make way for the private sector and markets, had already run aground. So, the latest developments are not promising, and may imply that those most enthusiastic about reforms are now on the back foot.

This is what markets and commentators may finally have realised. In this context, though, I was amused to read a current piece by Mohamed El-Erian in the FT’s Exchange blog (China needs to learn how to talk to markets). Specifically the part where he says that as that China ‘engages further on the road of economic liberalisation and broader market-based reforms’, it will have no choice but to become ‘more sensitive to short-term market positioning’ and better at communicating policies and ‘managing market expectations’.

El-Erian is no intellectual slouch, and a very experienced investor, but this is a bit parallel universe. I’m sure he meant to say that China’s mini-devaluation and stock market management were bungled, damaged the credibility of policy-makers, and in future, they need to take more care. Yet, the idea that Chinese policy-makers simply ‘got it wrong’ out of haste or lack of thought doesn’t really square with what’s going on in China. And the notion that leaders will have no choice but to learn about markets and treat them with more respect as they advance with fortitude down the path of economic liberalisation is, to put it bluntly, other-worldly.

Should the Fed raise interest rates?