The hastily convened Greek elections (25th Jan), in which polls continue to give a slender lead to the left wing, anti-austerity party, Syriza, follow soon after the ECB’s first Council meeting of the year (22nd Jan). The latter is widely anticipated to announce or implement a full QE programme in the face of divisions on the Council and on the Board, and, in turn, takes place about a week after the preliminary judgement (14th Jan) of the Advocate General of the European Court of Justice on the ECB’s OMT’s (Outright Monetary Transactions), referred to it by the German Constitutional Court about this time last year.

The ECJ decision will influence the ECB’s QE decision. QE, likely to be a guarded decision in my view, doesn’t need to be held up because of Greece, but the ECB can hardly commit to the purchase of bonds of a sovereign state that may want to put their value at the centre of debt renegotiation. If Syriza leads the new Greek government, expect the debate about symmetrical adjustment, or creditor-debtor relationships for simplicity, to intensify between Greece and its creditors, and to be watched closely by other like-minded political parties in Spain and Portugal, where elections are due later this year, and in Italy and France.

I wrote at some length about the forthcoming ECB decision on QE in this blog on 8th December 2014, under the heading ‘The ECB, QE and the Last Chance Saloon’. We may get an announcement only on the 22nd Jan, with implementation at a later stage. Either way, the size of the programme — perhaps €500-750 billion — may be limited by the OMT decision and internal ECB divisions.

It would be a shock if the European Court of Justice did not rule that OMT’s were compatible with EU primary law, but watch out for the caveats because the ECJ will presumably want to assure the German legal and financial establishments, among others, that the non-monetisation of budgetary financing and no sovereign bail-out rules are sacrosanct, and that there is no provision for debt mutualisation, that is that the ECB would be required to pick up the tab for any losses on sovereign bond purchases. Of course, these are precisely the things that a full-on integration of creditor-debtor relations require, but by now, we know this is not what the creditors want. Moreover, the length of time the ECB will commit to QE may be limited.

There’s little more to add to my previous post. But I would emphasise how important it is for the ECB to get it right this time, after making a catalogue of serial errors that we can summarise as:

or to understand the deflationary external environment

With the the December 2014 HICP reading at -0.2%, it is clear that the ECB’s task of reversing deflation or at least bolstering inflation expectations, on its own, is even bigger, and maybe even impossible. When the ECB’s latest GDP and inflation projections for 2015

And don’t be fooled by the December HICP core rate that flipped up to 0.7% year/year. This was driven by a 0.8% rise in service prices, in what seems to be a normal December service price effect on the HICP, and which is bound to wash out as the new year index readings are published.

Greece will get its debt restructuring, but under what circumstances?

In January 2010, as the Greek economy was starting to burn, EU leaders insisted at Davos that there would be no bail out for Greece, and the then Greek Prime Minister Papandreou assured audiences that his government would sort things out at home. Five years of depression and 2 bail-outs of €227 billion later, Greece has little but despair to show for this early hubris, and the disaster that followed. In the Greek elections in just over two weeks, polls suggest that the left-wing party Syriza will be the largest party, and form the next government. Its leader, Alexis Tsipras, has backed away from Grexit rhetoric — which most Greeks still spurn — but remains adamant that he wants Greek debt restructured, the bail-out c onditions relaxed or ended, minimum wage and public spending cuts reversed, and privatisation asset sales stopped.

These demands would go down like a lead balloon with the Troika, Angela Merkel, and several other EU leaders, giving rise to a potentially dangerous game of chicken that could, at the very least, generate new political shockwaves around the Eurozone, and, sooner or later, a deja-vu Euro crisis. How would you advise Mr Tsipras to pitch his case if he became Prime Minister? (My thoughts at the end)

But as things stand, Syriza’s agenda is playing well enough to make it the largest party in the legislature, though it is impossible to predict whether and with whom Syriza would go into coalition. According to a very recent survey done by Alco for To Poniki newspaper, Syriza is on course to get 31.6% of the vote, compared with 28.6% for the incumbent New Democracy. Two other surveys published on the same day,  7th January, gave the two parties 28.5% and 25.3% (GPO survey for Mega Channel), respectively, and 29% and 25.5% (Pulse survey for Action24 website), respectively. Three quarters of Greeks polled said they favoured staying in the Euro Area, while a little over half said they thought that Greece’s creditors would have to cave in to Syriza’s debt renegotiation demands.

Apart from the negotiations with the Troika over bail-out terms and conditions, debt looks likely to become the principal game of chicken between an anti-austerity government in Athens and its creditors.

Sovereign debt now stands at about €322 billion, or 179% of GDP. As a result of the past ‘one-off’ restructuring, 80% of debt is now held by official agencies. In 2013, the average maturity was 16.5 years, and the average interest rate Greece paid was 2.5%. About €16 billion is still available to draw, some from the EFSF, but mostly from the IMF, and Greece’s debt repayments in 2015 are predicted to be around the same, with nearly 7 billion due in July and August. Greece has achieved a primary surplus already, estimated by the IMF at about 1.5% of GDP in 2013-14, but the terms of repayment and servicing require Greece to treble the size of the primary surplus to 4.5% of GDP in 2016 and following years. These estimates take no account of the costs of commitments to pensions, and healthcare as a result of ageing.

We could imagine that a Syriza-led government might feel emboldened taking on the Troika and Germany, believing that the desire to keep Greece inside the Eurozone was sufficiently strong as to lead to a significant softening in their existing positions. On this basis – and assuming that the confrontational option of debt repudiation was held back to be used in anger as a last resort – Greece could advance its case asking for longer repayment maturities, perhaps a grace period before repayments commence, and even some formula to link debt interest payments to GDP growth.

From the standpoint of Germany and other European sovereign creditors in the same camp, the bluff would be to stand firm, or offer a mimimalist concessions, on the basis that if most Greeks wanted to stay in the Eurozone, the government couldn’t take the country out anyway – especially not a weak government coalition that might fall quickly for other reasons.

There has been much speculation lately — denied in Germany officially — that the German government is more relaxed about a Greek exit now than in 2012 because banks have more capital, new European banking and financial institutions have been created or strengthened, the ECB is ‘up and running’ as a lender of last resort to banks and sovereigns (almost), and the chances of a systemic collapse if one country left appear significantly less now that the periphery of the Euro Area is no longer in free-fall.

There is an element of truth in this, and it is certainly highly believable that Berlin, Frankfurt and Brussels would not want to make major concessions to a demanding or threatening Greek government, for fear that other like-thinking governments in Spain, Italy and Portugal would take them as a ’me too’ green light.

Against this, if push came to shove, no one has a clue what a Grexit might look like now, any more than in 2011-12. The backchat that the Eurozone could accommodate one better than before is at least unreliable and probably bravado. It would most likely be highly destablising and disruptive economically, even if a Teutonic rump remained in situ.  And a serious Euro crisis would weaken Germany politically at a crucial time when it is looking eastwards with not a little alarm.

I think Tsipras holds some decent cards. He can (figuratively) use these OECD Survey charts of key indicators to summarise the protracted fall in Greece’s external deficit, ie it is no longer as dependent on capital inflows, and in the fiscal deficit. While still large in non-cyclically adjusted terms, it has collapsed, and as stated, earlier, Greece has already attained a primary surplus. This has helped to swing the balance of power in the creditor-debtor relationship back towards Greece a little. 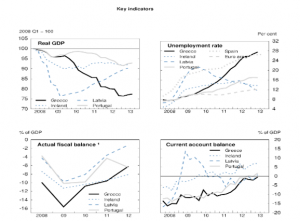 Accordingly, the next Greek government could argue that over the last five years, it has been a dutiful debtor. Banks have been restructured and recapitalised, some lending is occurring, administrative burdens have been reduced, improvements in public administration reform and judicial processes have begun, competitiveness indicators have strengthened, exports and tourism receipts are up.There’s a long way to go, but structural refo rms take time and patience in any case. Yet structural reforms and austerity programmes are only viable over the medium- to longer-term if people have reasonable

cause for hope and aspiration. He could then point to the GDP and unemployment charts to deny this is the case, and assert a continuing crisis affecting income distribution, poverty, unemployment, real income funk, a weak social safety net, and poorly targeted social, healthcare and pension spending.

After six years of depression, it is time to change the nature of adjustment. The price of Greece’s continued Euro membership should be a willingness by creditors to share the burden of adjustment. Debt relief or renegotiation is the right place to start.

EU and ECB leaders will probably resist, falling back on rules that prevent direct fiscal effects on other Eurozone members, bail-outs of sovereigns, and losses accruing to the ECB. They will warn of moral hazard and the risk that everyone might demand debt relief. All of these rules and stipulations are to protect creditors from the costs entailed in sharing the burden of adjustment. But insisting on these will end badly.

There is no alternative to debt restructuring — except an unlikely outburst of inflation — and Greece will get it one way or another. It is not for nothing that Mr. Tsipras has already referred to the 1953 London Debt Agreement in which the victorious WW2 allies wrote down or deferred, in effect, 70% of Germany’s foreign debt. The creditors paid, the debtor got a largely clean slate from which to launch its Wirtschaftswunder. It would be magnanimous to grant a Syriza government the same opportunity to reboot economically. We can only hope it is granted in good faith, and not seized by exit and repudiation.

Causes and consequences of China’s contagious case of deflation

Can we curb the capacity of banks to create crises?