Six years ago, world trade collapsed as the financial crisis and recession froze the global economy. It bounced back in 2011 but has been anaemic ever since. It explains a minor part of why western growth has been subdued, and a lot more of why emerging market economies (EMEs) have been on the rack. In the following picture, the yellow line (left) shows the underlying trend in export growth for a large sample of EMEs, along with the rather worrisome collapse in total factor productivity growth (blue, right). The two phenomena are not unrelated. 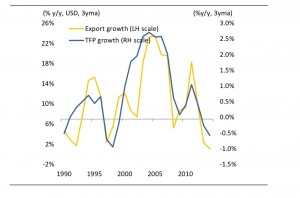 The sequitur here should be that once world trade picks up again, so will EM economic and TFP growth, and all will be well. Perhaps. But let’s examine what’s been going on and why. I’m not suggesting world trade is going to remain in a funk for ever, but there aren’t any strong signs that it’s about to end either.

The rise in significance of world trade

Economic and finance media are hooked on things like GDP, productivity and jobs, understandably, but world trade lies at the heart of global economic integration which is what drives the former phenomena, at least in part. And it’s big. World trade in goods and services amounts to roughly $22 trillion, which is close to 30% of world GDP. From the mid-1980s until the financial crisis, world trade grew at twice the rate of world GDP, fueling rising living standards worldwide. For developed economies, trade increased from 13% to 27% of GDP, while for EMEs, it rose from 20% to 40% of GDP.

Before 2007 world trade grew at twice the rate of world GDP for about 20 years. Since the financial crisis, though, this 2:1 relationship has broken down. World trade has done no better than grow in line with world GDP. In fact, in the 3 years to 2014, it grew at a paltry 2.4% per year, a little less than 3 times the rate of expansion in the decade before the crisis (6.8% per year). The WTO thinks trade growth will inch up to 3.3% this year and then 4% in 2016, but this was before the disappointing start to the year in the US and China, and the continuing flow of unsatisfactory economic developments in many large EMEs. Year after year, since 2011, economic forecasters expect the outlook for EMEs to improve, based on an expected upturn in world trade. It’s been like waiting for Godot.

It’s not been bleak for everyone. In Asia, for example, Vietnam, Cambodia and Bangladesh are turning out better export numbers than for developing Asia, while in Africa, the eastern part of the continent, including Kenya, Uganda and Tanzania are doing a lot better than their regional peers. All of these countries are recording export growth that’s faster than the EME group as a whole.

In general, though, the cloud hanging over world trade spells continuing growth troubles for many EMEs because the fortunes of so many depend on economic development models based on selling:

Some of this could be cyclical, i.e. there could be a rebound when either or both of the above change. But China’s real estate investment fade isn’t cyclical, and under all circumstances, we should expect the commodity intensity of China’s economic growth, whether at 7%, or more likely 4% in the future, to be markedly lower than over the last 15 years. The subdued nature of western consumption could be more cyclical, and therefore, prone to a reversal at some point. But western economies are, nevertheless, plagued by weak wage and salary growth, high levels of private and or public debt, and a post-crisis adjustment that is likely to endure for some time yet. US interest rates look likely to rise in coming months, and before long, we will start wondering when the next business cycle downturn might occur. So, even if the western consumer is a cyclical explanation, the already 5-year old cycle could get a lot older first.

Other structural explanations figure prominently too. The sensitivity of world trade to world GDP, as suggested earlier, has weakened. In economic jargon, the income elasticity of trade has fallen, as shown in the following picture. Note that the decline began in the 2000s, though not materially until late int the decade and subsequently. 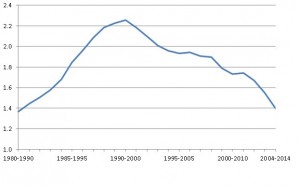 Several factors could be at work, and I exclude the often cited increase in protectionism and the imposition of an array of nearly 6000 trade restraint measures by G20 countries since 2008, not because they are unimportant as such, but because they affect such a small proportion of world trade, may no more than 4-5%. Of those that may be more influential, consider: 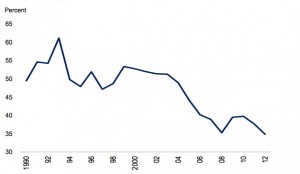 In any event, whether the causes are longer-cyclical, or long-term structural, the poor showing of world trade in the global economy is a big miss, and is a big part of the reason we now see the global growth pendulum tilting back to developed economies, EMEs need their export mojo back, or, in the absence of a shift in their development models, growth will continue to disappoint.

Greek debt crisis: what will happen next?

Greece and its creditors: takes two to tango, and it's not all about austerity

Top column from ⁦@ChrisGiles_⁩. The rigid ideologues are in the Tory party not the Tsy. Lessons for Truss when econ… twitter.com/i/web/status/1…
2 hours ago
Good time for Conservative Party conference this w/end : UK economy latest news: Labour party stretches poll lead t… twitter.com/i/web/status/1…
2 hours ago
@kitjuckes what’s ‘up’ with £ today? Was it PBoC intervention triggering a dollar down day ? Something else?
6 hours ago
Means nothing. #clutchingatstraws twitter.com/julianhjessop/…
6 hours ago
@Brad_Setser Needs a model change Brad. Everything else is a rounding error
7 hours ago