Last year it was a crisis, this year it barely merits a mention. ‘It’ is the depreciation of the RMB. Since 1 April, the RMB has fallen to 6.675 to the US dollar, having touched 6.69 on Tuesday, a fall of roughly 3%, to stand at its lowest level since 2008-2010, when it was re-fixed at around 6.80 in the face of the looming global economic crisis. Compare and contrast with the 2.9% mini-devaluation between 10-13 August 2015, then the largest decline for 20 years, which sent global markets into a tailspin amid talk of a coming global economic panic and a looming economic disaster in China, nether of which occurred.

People’s Bank of China Governor Zhou Xiaochuan, who maintained a long silence and absence from the fray last summer, has been a continuing source of reassurance this year. On 16th April, he told the Xinhua news agency that there was ‘no basis for persistent RMB depreciation’, and yet, the RMB has now dropped by 10.6% since it peaked at 6.08 against the US dollar in January 2014. If the August 2015 scare was a chronic over-reaction, though, are we perhaps missing something currently?

There are at least four marked differences between then and now.

1) Then, global financial markets were fully expecting the Federal Reserve to raise interest rates for the first time since 2006 at its September meeting, and to carry on doing so. As we know, it got spooked by China before that meeting, and again by China and emerging markets in January, and yet again more recently by the May payroll numbers and the Brexit referendum outcome. Current sentiment about US interest rates, especially given the US economic backdrop, is pretty benign, but in the merry-go-round of market versus Fed interest rate expectations, Fed officials are again hinting that another rise in interest rates in September is still possible, and that a second rise before the end of the year cannot be dismissed.

2) Then, China’s stock market had been through two torrid months of decline. The Shanghai Composite index had peaked at 5166 on 12th June, and plunged to 2927 by 26th August in the face of over two dozen initiatives to stop the decline. Eventually the stock market reversed direction but the index again fell through this level in January 2016, subsequently trading around the 3000 level. The current fall in the RMB, therefore, is occurring against a very different domestic backdrop compared to last summer’s evaporation in confidence in the authorities’ capacity to manage untoward events.

3) Then, China’s foreign exchange management policy was articulated solely in terms of the US dollar. In December, that changed when the authorities introduced the China Foreign Exchange Trade System (CFETS) effective exchange rate as an additional currency management tool, partly designed to give the PBC greater flexibility in the face, for example, of a rising US dollar. The index comprises 13 currencies, with the US dollar, the Euro and the Yen having weights of 26.4%, 21.4% and 14.7% respectively. The share of the British pound, by the way, is less than 5%. The theory was that the PBC could target the US dollar and ‘monitor’ the index separately, and indeed, until March this year, the RMB rose gently against a weaker US dollar, while falling against the trade-weighted index. Since then, however, even as the RMB has fallen against a stronger US dollar, it has continued to fall steadily against the index.

In other words, although China has been unwilling to resort to a showpiece RMB devaluation, it has nevertheless been happy to run with a relatively orderly, multilateral depreciation for the last 3 months or so. If that policy does not change soon, as global Brexit worries abate or become less alarming in global capital markets, then we will know that something has changed, suggesting that China is in fact going for a more significant depreciation.

4) Similarly, it’s worth noting that Chinese non-FDI capital outflows, whether via traditional methods or by trade invoicing practices, do seem to have dropped off since the second half of last year. By late 2015 and early 2016, these were running at about 10% of GDP. Bearing in mind that companies have probably completed the bulk of the re- or pre-payment of US dollar liabilities, and that the foreign exchange reserves data over recent months have been more stable, we can assume that the intensity of non-FDI outflows must have abated. That said, we should certainly expect them to continue, given the current and prospective economic and political climate in China. But it doesn’t take much to bring them suddenly back into the limelight, and this merits close scrutiny. 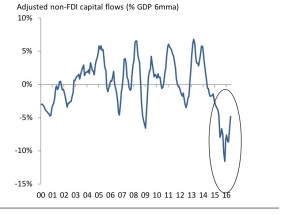 These things aside, the economy has also stabilised in contrast to what was expected last summer for three reasons. First, the resurgent credit boom had only really started in April 2015. Second, a big increase in central government fiscal spending was only just beginning. Third, a major shift in public sector investment had yet to kick in.

The causes of China’s economic stabilisation, then, are not obscure. The popular credit aggregate, total social financing, while erratic, is still running fast, up 14.3% in the year to June, or roughly twice the rate of growth of nominal GDP. A broader measurement of banking sector claims, including importantly, all lending to local and provincial governments and claims on non-banking financial intermediaries, which comprises published data that are not included in TSF, points to growth nearer 22%, or 3 times the rate of change in GDP. Central government spending has risen to 27% of GDP, compared with 23% a year ago. The likelihood of any restraint being applied to either monetary or fiscal policy before the 19th Congress at the end of 2017 seems slim.

Some point to the reminders offered by the ‘authoritative source’ interview in the Global Times interview in early May that a policy shift is in the offing. But it seems more and more likely that the interview was not so much a Xi Jinping-approved appeal for a new zeal about reform, as much as evidence that policy-making has become dysfunctional and disconnected, not least because of the President’s initiatives to centralise power and rely on ‘Leading Small Groups’ to bypass the institutions of government. Indeed, the confusion and uncertainty surrounding the RMB crisis last year is better seen in the context of precisely this phenomenon.

The effects of more expansionary credit and fiscal measures have been clear to see for a while in the housing market, and again last week in the Q2 GDP numbers. In April/May, property sales reached a new peak, inventories of unsold homes dropped back to 18-20 months of supply (higher of course in Tier 3 and 4 cities), and prices, even excluding Tier 1 cities and the spectacular 50% year to date rise in Shenzhen property prices, have edged back to about +3-5% year over year. These trends though are not widely expected to endure, as lending stimuli, developer activity, and public initiatives fade over the balance of the year.

Q2 GDP came in at a more or less expected 6.7%, but the two noteworthy trends were the dominance of the ‘old economy’ in generating that growth, and the extraordinary slump in private sector investment. This chart from fastFT shows the basic sectoral picture. 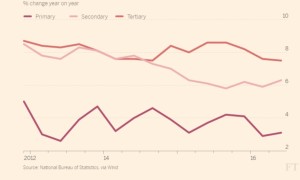 It’s worth noting that services also include a number of ‘old economy’ activities, notably real estate and financial services. Much of the rebalancing argument dwells on how well service-producing industries are performing, obscuring the dominance of finance and real estate and without drawing attention to the significance of still relatively small and protected modern service industries, for example, in information technology, professional and business services, and healthcare and education. But even taking into account the broad aggregate, a moderating contribution from services through Q2 is still evident.

The slump in private investment, though, revealed by the fixed asset investment data – not strictly the same as the capex numbers in GDP – caught our eyes for sheer scale and extent, and for the compensation provided purely by state sector investment. And when we consider what’s happening here politically, it’s hard to come away wth much more than a sense of economic foreboding. Here’s another chart from fastFT. 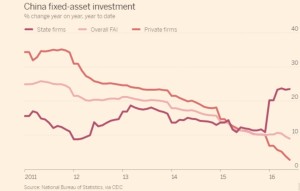 China: state investment to the rescue

Two things are quite clear. First, the government has, if anything, strengthened its hold and control over state enterprises, subordinating reform to the implicit  6.5% growth goal in the new Five Year Plan to 2020. Second, despite the rhetoric and anecdotes of cutting back over-capacity and so on, ether isn’t much evidence that much is happening, especially as state enterprise investment programmes are being expanded. In shipping, iron and steel, power generation and railways, for example, mergers have created larger state enterprises with bigger liabilities. There is a case, of course, for industrial policy along these lines but it conflicts sharply with the prevailing reform narrative.

The Chair of the Leading Special Group for SOE reform, Ma Kai, was supposed to push through significant market-oriented reform plans in 2014. There have been some changes to SOE governance and executive compensation systems, but political interference by the Communist Party, bureaucracy, pushback and lack of clarity in implementing reforms have colluded to render the exercise largely academic. In the SOE sector, falling profits and skinny return on assets and on equity ratios – especially compared to private sector enterprises – are all that the government has to show for its ‘reforms’ so far. In fact, the financial condition of SOEs, including their role in the expansion of non-financial corporate debt is all the more worrying when you consider how the data are flattered by subsidies, monopoly power, cheap and preferential financing, and low tax rates.

Bringing it back home to the RMB

This summer, then, there probably won’t be a repeat of what happened in RMB and other Chinese financial markets last August or in January this year. But sooner or later, another eruption is likely, as the economic slowdown gets a new twist. The trigger may be a renewed rise in capital outflows but the cause will be unaddressed domestic economic policy issues, notably the build-up in credit excesses.

It is possible,as some economists point out, that the investment slump in the private sector, covered temporarily by state investment financed by credit creation may end up in a higher Chinese current account surplus (given that savings are unlikely to fall much, if at all). This could, perversely, exert upward pressure on the exchange rate. But that’s only one side of the story. Mobile capital, even in China, and inconsistency and lack of transparency in policy can certainly generate offsetting capital outflows that will continue to push the RMB down.

One day, there may be a big policy decision to be made about a devaluation. Whether or not that’s the case, I reckon the RMB-US dollar rate will continue to trade lower. At the risk of hostage to fortune, say 7 before the end of the year. Then re-assess.

Turkey's failed coup could lead to economic failure too

What is worse than a recession?