According to the most recent monthly Ipsos Mori poll of the most important issues facing the UK, the EU was ranked third, quite a way back from the NHS and immigration. In January, the EU ranked even lower with 16% of respondents saying it mattered. In the same polls done last year, it didn’t rank at all in the top 10 issues. The two most highly ranked issues, along with the economy have consistently been at the top of the pile, and the EU has crept up, inevitably, with the countdown to the referendum. Many of you will get where this is going. 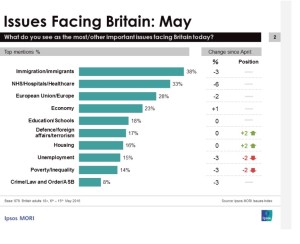 My view has been that the battle of ideas in the referendum campaign would be won by three things: first, the facts of the economics of EU membership, including of immigration; second, the common sense highlighting the perils of European disintegration; and third, the judgement that the future security of our children in a fractious world would be best served by sticking with our geography, and its ties, warts and all.

I haven’t quite given up on this at all. But if I should prove to have been woefully naive on the 23rd June, then it will have been down to something akin to the substance of a conversation I had last Thursday with a 40-something, dyed-in-the-wool Labour man from the East End of London, who drove me home from Paddington station while the radio broadcast David Cameron having a difficult time with an audience.

He told me he had voted out that day by postal ballot and asked me if I was interested in or minded talking about the campaign. In the course of nearly an hour, he must have apologised (needlessly) 4 or 5 times for being inarticulate. He said he wasn’t sure what exactly to believe about the EU’s pros and cons, but that the UK might be better off inside if the EU stuck together. However, he asked me several times to believe him that he wasn’t a racist, that he got on perfectly well with peoples of all colours and creeds, and had no special issues with EU migrants per se…. and yet…..

He said that most of his family and many friends had, over time, moved away to parts of Essex as his community in East London – where his dad and grandfather and their ancestors had been dockers or labourers – had become transformed by immigration. He and his immediate family had decided to stay put and get on with their lives, but they had for some time felt distant and sometimes alienated in their own community. “And it’s not just us’, he said, ‘but also, and you may not believe me, a lot of people I know who were immigrants or from immigrant families’.

He went on to say that his kids couldn’t find work locally, whereas he and his friends had always managed to find work in a  local grocery store, supermarket or coffee bar. The medical care his wife needs had been complicated and drawn out by the overcrowding in GP,  A&E and hospital appointment and treatment systems -which he said wasn’t just down to more older people but also to a large increase in the numbers of non-English speaking peoples. At the local school, where his children went and still attend, multiple languages were spoken by kids and their parents that made communications and forming friendships hard, and in his view, made classroom progress slower. Housing had been a problem for a long time, but the clash of low building rates and higher demand as migrants settled in to the area had made renting and buying conditions even tougher for long-term residents. His world was not the world of economic aggregates that I live in professionally, but one that he lived and breathed every day, close up.

He seemed genuine and troubled, and anything but a ‘ranter’. I told him I would vote Remain and why, as an economist, I thought it staying in was the only logical thing to do. I explained that immigrants were still a relatively small proportion of the population, and that public spending cuts and poor immigration management strategies were perhaps more culpable for the pressure on public and local services than immigrants themselves. But he wasn’t really persuaded or doubtful about the way he had voted. He was no little Englander, he lives and participates in a very cosmopolitan part of the country, didn’t offer any vacuous arguments about sovereignty, or EU bureaucracy, and was as critical of the Leave leadership as he was of the Remain campaign talking heads, including those in the Labour Party.

But he said that he and even some of his immigrant friends in his community thought it was now time to say ‘enough’. I asked him if he thought he felt he and his family and friends thought they had been ignored for too long, that governments over time had not paid enough attention to their concerns and sensitivities, and whether they were in fact telling the government and to the Remain camp to ‘stick it’. ‘That’s exactly how I feel’, he said, ‘exactly’.

As we wound the conversation down, I realised that this chap doesn’t give a stuff about the economic arguments or the sheer weight of institutions and authoritative reports backing Remain. He couldn’t care less about the lectures and facts about immigration that many of us can and do insist on, and that are mostly mis-represented by the Leave campaign. For him, the most important thing in the world, brought to the fore by the referendum, isn’t the EU itself, but the transformation of his community and daily conditions, which he associates with years or decades of immigration mismanagement.

Whether his innermost feelings were about immigration, itself, or the process of integration, I couldn’t tell. His point of view certainly came across as the latter. Be that as it may, it makes us ask whether the government and local councils should  do a better job at managing immigration, and joining up better the integration of communities and resources. After all, at a time of relentless and rising demand for public resources because of ageing, additional unplanned or unexpected immigration flows could generate still more local tensions and social friction. As far as this referendum and my driver are concerned, though, it’s too late, and no number of facts is going to change his mind. It’s visceral.

That’s what Remain is up against. Facts yes, by all means, but show some understanding and empathy too. I’m not sure at all from one day to the next whether younger voters and waverers will be persuaded, despite this, to tilt the vote to stay, assuming they can be persuaded to turn out to vote in sufficient numbers in the first place. But whichever way the vote goes, our ‘elite’ and political parties are going to have to do a better job, listening to what communities are saying, and not what top down researchers tell them.

We should vote Remain: Leave is selling a false prospectus*